Ludo Multiplayer  is a strategy board game for two to four players, in which the players race their four tokens from start to finish according to the rolls of a single die. Like other cross and circle games, Ludo Multiplayer is derived from the Indian game Pachisi, but simpler. The game and its variations are popular in many countries and under various names.

Pachisi was created in India in the 6th century. The earliest evidence of this game’s evolution in India is the depiction of boards on the caves of Ellora. The original version is also described in Indian epic Mahabharata in which Shakuni uses the cursed dice to beat the Pandavas and at last after losing everything, Yudhisthira puts his wife Draupadi on stake and loses her too.

However, Pandavas get all their belongings back after Draupadi vows to curse the whole Kuru lineage but stops at the intervention of Gandhari and seeing an opportunity to vent Draupadi’s anger, Kuru king Dhritarashtra promises to give back the Pandavas, all that they had lost in the game. It was also known as Chaupar in ancient times.

The contemporary version was played by the Mughal emperors of India; a notable example is Akbar. Pachisi was modified to use a cubic die with dice cup and patented as “Ludo Multiplayer” in England in 1896. The Royal Navy took Ludo Multiplayer and converted it into the board game Uckers.

An original Ludo Multiplayer board

Special areas of the Ludo Multiplayer board are typically coloured bright yellow, green, red, and blue. Each player is assigned a colour and has four tokens in their colour. The board is normally square with a cross-shaped playspace, with each arm of the cross having three columns of squares, usually six per column. The middle columns usually have five squares coloured; these represent a player’s home column. A sixth coloured square not on the home column is a player’s starting square. At the centre of the board is a large finishing square, often composed of coloured triangles atop the players’ home columns (thus depicting “arrows” pointing to the finish). 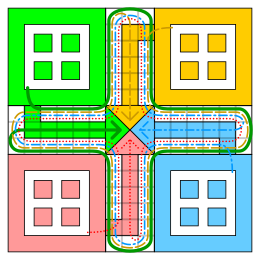 Two, three, or four can play, without partnerships. At the beginning of the game, each player’s four tokens are out of play and staged in the player’s yard (one of the large corner areas of the board in the player’s colour). When able to, the players will enter their tokens one per turn on their respective starting squares, and proceed to race them clockwise around the board along the game track (the path of squares not part of any player’s home column).

When reaching the square below his home column, a player continues by moving tokens up the column to the finishing square. The rolls of a single die control the swiftness of the tokens, and entry to the finishing square requires a precise roll from the player. The first to bring all their tokens to the finish wins the game. The others often continue to play to determine second-, third-, and fourth-place finishers.

Each player rolls the die; the highest roller begins the game. Players alternate turns in a clockwise direction.

To enter a token into play from its yard to its starting square, a player must roll a 6. The player has to draw a token from home every time he gets a 6 unless home is empty or the start box has 2 own tokens (is doubled). If the player has no tokens yet in play and rolls other than a 6, the turn passes to the next player.

Players must always move a token according to the die value rolled. Once a player has one or more tokens in play, he selects a token and moves it forwards along the track the number of squares indicated by the die. If an opponent’s token is blocking your pathway, you will need to land on the same space as the token to capture it. You cannot move past that token. Passes are not allowed; if no move is possible, the turn moves to the next player.

If the player cannot draw a token from home, rolling a 6 earns the player an additional or “bonus” roll in that turn. If the bonus roll results in a 6 again, the player earns again an additional bonus roll. If the third roll is also a 6, the player may not move and the turn immediately passes to the next player.

If the advance of a token ends on a square occupied by an opponent’s token, the opponent token is returned to its owner’s yard. The returned token can be reentered into play only when the owner rolls a 6. If a piece lands on the same space as another piece of the same colour, the pieces are doubled and form a “block”. If the advance of a block ends on an opponent’s block, the latter is captured and returned to its owner’s yard, collectively.

A player’s home column squares are always safe since no opponent may enter them. In the home column, you cannot jump over your token. Roll the exact number needed to get each token onto the home triangle.

In some parts of Africa the following rules are reportedly played:

Everyone knows the Ludo Multiplayer game and it isn’t just the game of luck.

In the game of Ludo Multiplayer, Strategies play a very important role.

It is possible that your pieces are captured and you will not succeed.

The good player will always make the strong and right strategy to defeat their opponents. The good game requires strong strategy, and also luck plays an important part when you look to download Ludo Multiplayer game here.

There are a few tricks that will include in the online ludo game strategy. And this can help you to reach your target as well as lead you to a great victory.

Suppose you’re playing the Ludo Multiplayer game we encourage you read further. So, we are highly convinced that ludo game apps can be the great interest for you.

Here, we will show how you will win at online ludo. Here in this blog post, you will learn some basic and essential trick for succeeding and Ludo Multiplayer download lots of games.

Tricks That Will Help You Win the Ludo Multiplayer Game

It is very important to block the opponent’s move.

It’s really one very good trick that you need to follow when you Ludo Multiplayer game download, as every turn that the opponent will not move your right move and in that you win.

· You already have tried keeping you Ludo Multiplayer game online safe never put on risk. So, by the good move get this to the point and it is always good to take the risks with ones that you have the closer to home.

· However, remember, you do not go over top with these blocks, as at a same point you may have already opened up. Your pieces & you will be at danger zone and where you will lose or else defeat by your opponents so Ludo Multiplayer game downloading can be easily done.

Fun when playing as a team in Ludo Multiplayer

· You do not block your exit square while the pieces in home position. More pieces mean you get more chances to move towards your target.

· It’s really tough to control the pieces just imagine to look out for the partner’s four pieces so that they will win soon and keep many pieces if possible. It is a lot of fun playing all alone against everybody.

· Avoiding making blocks, and remember if two and more players from the series of bridges, the pieces will be vulnerable.

· In the Ludo Multiplayer online for teams, you may capture the partner’s piece and move ahead 20 squares.

· By best sequence of the movements before moving the piece, you can choose the better strategy for defeating the opponents.

· You remember that your wrong move is better for your opponent.

· You have to read Ludo Multiplayer Board before moving your piece. Remember your wrong move can

be better for the opponents. Never over think, have you limited time for moving your piece.

Much fun in Ludo Multiplayer

Next Post
Side To Side – Ariana Grande ft. Nicki Minaj