Nine mens morris is a strategy board game for 2 players dating at least to the Roman Empire. The game is also known as nine-man morris, mill, mills, the mill game, merels, merrills, merelles, marelles, morelles, and ninepenny marl in English. The game has also been called cowboy checkers and is sometimes printed on the back of checkerboards. Nine men’s morris is a solved game, that is, a game whose optimal strategy has been calculated. It has been shown that with perfect play from both players, the game results in a draw. Its name derives from the Latin word merellus, ‘gamepiece’.

The board consists of a grid with twenty-four intersections or points. Each player has nine pieces, or “men”, usually coloured black and white. Players try to form ‘mills’—three of their own men lined horizontally or vertically—allowing a player to remove an opponent’s man from the game. A player wins by reducing the opponent to two pieces (where they could no longer form mills and thus be unable to win), or by leaving them without a legal move.

The game proceeds in three phases: 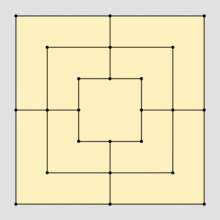 Nine mens morris starts on an empty board.

Nine Mens Morris begins with an empty board. The players determine who plays first, then take turns placing their men one per play on empty points. If a player is able to place three of their pieces on contiguous points in a straight line, vertically or horizontally, they have formed a mill and may remove one of their opponent’s pieces from the board and the game, with the caveat that a piece in an opponent’s mill can only be removed if no other pieces are available. After all men have been placed, phase two begins.

Players continue to alternate moves, this time moving a man to an adjacent point. A piece may not “jump” another piece. Players continue to try to form mills and remove their opponent’s pieces as in phase one. A player can “break” a mill by moving one of his pieces out of an existing mill, then moving it back to form the same mill a second time (or any number of times), each time removing one of his opponent’s men. The act of removing an opponent’s man is sometimes called “pounding” the opponent. When one player has been reduced to three men, phase three begins.

When a player is reduced to three pieces, there is no longer a limitation on that player of moving to only adjacent points: The player’s men may “fly” (or “hop”, or “jump”) from any point to any vacant point.

Some rules sources say this is the way the game is played, some treat it as a variation, and some do not mention it at all. A 19th-century games manual calls this the “truly rustic mode of playing the game”. Flying was introduced to compensate when the weaker side is one man away from losing the game Nine Mens Morris.

At the beginning of Nine Mens Morris, it is more important to place pieces in versatile locations rather than to try to form mills immediately and make the mistake of concentrating one’s pieces in one area of the board. An ideal position, which typically results in a win, allows a player to shuttle one piece back and forth between two mills, removing a piece every turn.

Three men’s morris, also called nine-holes, is played on the points of a grid of 2×2 squares, or in the squares of a grid of 3×3 squares, as in tic-tac-toe. The game is for two players; each player has three men. The players put one man on the board in each of their first three plays, winning if a mill is formed (as in tic-tac-toe). After that, each player moves one of his men, according to one of the following rules versions:

A player wins by forming a mill. 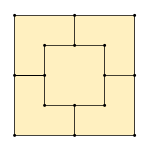 Six men’s morris gives each player six pieces and is played without the outer square of the board for nine men’s morris. Flying is not permitted. The game was popular in Italy, France and England during the Middle Ages but was obsolete by 1600.

This board is also used for five men’s morris (also called smaller merels). Seven men’s morris uses this board with a cross in the center.

Twelve men’s morris adds four diagonal lines to the board and gives each player twelve pieces. This means the board can be filled in the placement stage; if this happens the game is a draw. This variation on the game is popular amongst rural youth in South Africa where it is known as morabaraba and is now recognized as a sport in that country. H. J. R. Murray also calls the game “the larger merels”.

This board is also used for eleven men’s morris.

This variant (also called ten men’s morris) was invented by Emanuel Lasker, chess world champion from 1894 to 1921. It is based on the rules of nine men’s morris, but there are two differences: each player gets ten pieces; and pieces can be moved in the first phase already. This means each player can choose to either place a new piece or to move one of his pieces already on the board. This variant is more complex than nine mens morris, and draws are less likely.

Intersections, Corners, and Sides
Maximum mobility is the key to success in Nine Mens Morris, Triples.

During the placing phase, think several moves ahead. Place your pieces so that you can form more than one mill (three pieces in a row, horizontally or vertically). That way, if one mill is blocked, you can form a different mill on your next move. However, you should not force your opponent to keep blocking mills. This can lead to your pieces getting trapped. You are trying to set up the board for the second phase of play, the moving phase.

During placing, try to separate your opponent’s pieces from each other and block mills. Losing even one piece during the placing phase can be disastrous at the start of the moving phase.

Nine Mens Morris Moving Strategy
During the moving phase, try to predict where your opponent will try to make a mill. Move your pieces into positions that block your opponent from making a mill, but that allow you to form either a single mill or double mill on your next turn. When you make a mill, capture the opponent’s piece that is most likely to form a mill on a subsequent turn.

Single Mill
When you form a mill, simply move a piece out of the mill, and then return it to the mill on your next turn. This way, as long as your movement is not blocked, you can capture a piece every other turn!

Double Mill
When you can move a piece from one mill and complete a second mill, you have made a double mill. Congratulations! Continue moving the piece back and forth between the two mills. It is very difficult to counter a double mill, so do not let your opponent make one!

Jumping
If you are reduced to only three pieces, you are allowed to jump to any open position. You can use this to your advantage, as you can win by jumping into and out of a mill. The piece you jump out of the mill should also be used to block your opponent from making a mill. Be careful, though: Before you reduce your opponent to three pieces, make sure your opponent cannot jump into a mill on the next turn to win the game.

Checkers Multiplayer is a HTML5 Board Game. Enjoy this stylish version of the classic Checkers