Tic Tac Toe Multiplayer (American English), noughts and crosses (British English), or Xs and Os is a paper-and-pencil game for two players, X and O, who take turns marking the spaces in a 3×3 grid. The player who succeeds in placing three of their marks in a horizontal, vertical, or diagonal row is the winner.

In order to win the game, a player must place three of their marks in a horizontal, vertical, or diagonal row.

Players soon discover that the best play from both parties leads to a draw. Hence, Tic Tac Toe Multiplayer is most often played by young children, who often have not yet discovered the optimal strategy.

Because of the simplicity of Tic Tac Toe Multiplayer, it is often used as a pedagogical tool for teaching the concepts of good sportsmanship and the branch of artificial intelligence that deals with the searching of game trees. It is straightforward to write a computer program to play tic-tac-toe perfectly or to enumerate the 765 essentially different positions (the state space complexity) or the 26,830 possible games up to rotations and reflections (the game tree complexity) on this space.

When considering only the state of the board, and after taking into account board symmetries (i.e. rotations and reflections), there are only 138 terminal board positions. A combinatorics study of the game shows that when “X” makes the first move every time, the game outcomes are as follows: 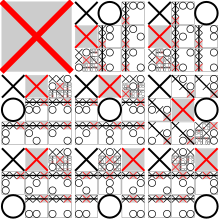 Optimal strategy for player X if starting in a corner. In each grid, the shaded red X denotes the optimal move, and the location of O’s next move gives the next subgrid to examine. Note that only two sequences of moves by O (both starting with center, top-right, left-mid) lead to a draw, with the remaining sequences leading to wins from X. 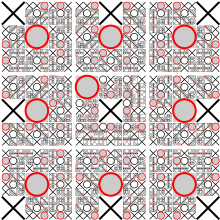 Optimal strategy for player O. Player O can only force a win or draw by playing in the centre first.

A player can play a perfect game of Tic Tac Toe Multiplayer (to win or at least draw) if, each time it is their turn to play, they choose the first available move from the following list, as used in Newell and Simon’s 1972 tic-tac-toe program.

There are several distinct strategies that can be employed to ensure victory when playing tic tac toe, but there are also a few simple tricks that new players can use to help their chances. Remember, this game is known as a ‘solved game’, which means that there is a definite strategy that can be employed to win every single time. However, if both players employ that same unbeatable strategy, the game will result in a draw every time. Here are a few tricks for new players to use:

These are just a few of the most basic tricks for new players, but the game includes several more nuances for the final moves.

Those who might want something a bit more challenging could attempt 3D tic tac toe, which is basically like playing three individual games of Tic Tac Toe Multiplayer but stacked on top of each other. This creates a 3D Tic Tac Toe where winning rows of three are possible through all three dimensions. Interestingly enough, the same rules apply, and many of the same strategies must be employed if you hope to win at this more complicated game type.

How To Win Tic Tac Toe Multiplayer If You Go Second

Even when going second, it is possible to still win the game, especially if the first player doesn’t employ the unbeatable strategy. It is easily possible to force a draw when you play second, but winning is a bit more complicated. Here is the best strategy for winning when playing second:

It should be noted that this strategy requires at least two errors from the player who went first, so it is rare that it can be employed. In most cases, if you are playing second, your main goal is to force a tie.

How To Never Lose At Tic Tac Toe Multiplayer

Some players want to learn how to always win, but others simply want to know how to never lose, which in essence means they want to know how to force a tie in any situation. Forcing a tie is quite easy in this game if you know the standard blocking strategy. Here are a few of the best strategies for forcing ties:

How To Win Tic Tac Toe Multiplayer Every Time

Unfortunately, there is no way to guarantee that a player will win every single game of tic tac toe multiplayer they play. Victory, defeat, or a draw is determined by the interaction of both players. If both players operate perfectly, a draw will always occur. The best strategies to win are: