“Problem” is a song by the American pop singer Ariana Grande, featuring the Australian rapper Iggy Azalea. It was written by both alongside Savan Kotecha, Ilya and Max Martin, being produced by the latter two with Shellback, with Peter Carlsson serving as a vocal producer. The song was released by Republic Records on April 28, 2014, as the lead single from Grande’s second studio album My Everything (2014).

“Problem” is an uptempo dance-pop song with influences of R&B music, which comprises a melody based on drums, saxophone loops, and trumpets. The chorus features uncredited background vocals from American hip hop artist Big Sean. Lyrically, Grande has stated that the song is about “the feeling of being absolutely terrified to re-approach a relationship that’s gone sour – but you want to more than anything.”

The song debuted at number three on the Billboard Hot 100 selling 438,000 copies in its first week on sale, earning Grande her biggest digital song sales week ever. The song later peaked at number two, surpassing “The Way” as her highest-charting single in the United States at the time. It also became Azalea’s second-highest charting single in the US, after her own single “Fancy”. “Problem” remained in the top ten of the Hot 100 for the first sixteen weeks of its chart run, making its number three debut on May 7, 2014 and dropping out of the top ten on August 27, 2014.

It topped the US Mainstream Top 40 and Rhythmic charts. Internationally, the single debuted at the top of the charts in Ireland, New Zealand, Scotland and the United Kingdom, while peaking within the top ten of the charts in most other territories, including Australia, Canada, Mexico, Sweden, Denmark, and Greece. “Problem” became the first song to top the UK Singles chart based on both sales and streaming.

As of 2018, the single has sold 3.7 million copies in the US and has been certified sextuple platinum by the Recording Industry Association of America (RIAA) in March 2016. It ultimately reached combined sales and track-equivalent streams of 9 million units worldwide, becoming one of the best-selling singles of all time.

After recording multiple songs for the album, Grande stated that she had chosen the first single from her album. On April 15, 2014, it was officially announced that “Problem” would be the title of the lead single from the album. Grande later hinted that Australian rapper Iggy Azalea would accompany her on the track. She created online buzz in the weeks leading up to her single’s release through social media, first released promotional images from the single’s photo shoot all throughout March 2014.

On April 10, 2014, Grande asked her fans to choose between two new possible images to be used for the single’s artwork release. After the votes were tallied, she revealed the winning cover artwork through her Instagram account the next day with the hashtag #10daystilproblem, and revealed that Iggy Azalea would be assisting her on the track. The winning image, the more seductive image of the pair, shows Grande leaning back in a foldout chair, dressed in a black camisole, white thigh-highs, and metal-tipped stilettos. Grande is also shown flipping through her hair while looking directly into the camera. The song was released at midnight to iTunes on April 28, 2014.

The single was made available for pre-order on April 21, 2014. The single made its world radio premiere on On Air with Ryan Seacrest on April 28, 2014. A remix of the song was released on May 16, 2014 entitled the “Young California Remix” and features an additional rap verse from American rapper Problem. A Spanglish version of the song was also released featuring Colombian rapper J Balvin for the Hispanophone market, making it the second collaboration between the two artists. In August 11, a remix version by DJ Boss in Drama was released in Brazil featuring Brazilian pop singer Gretchen.

Musically, “Problem” is an uptempo dance-pop and R&B song that incorporates elements of jazz, contemporary ’90s R&B, hip hop and funk which comprises the instruments like drums, saxophones and trumpets. It runs for a duration of three minutes and 14 seconds. The song was written by Grande, Azalea, Savan Kotecha, Ilya Salmanzadeh and Max Martin, and produced by the latter two along with Shellback.

According to the sheet music published by Alfred Publishing Co., Inc. on Musicnotes.com, “Problem” is composed in the key of G♯ minor and set in common time at a moderate tempo of 103 beats per minute. The melody spans the tonal range of G♯3 to G♯5 belt and D♯6 in falsetto, while the music follows the chord progression of Emaj7–F♯–B– Emaj7–F♯–G♯m.

The track opens with a dose of “jazzy saxophones” before the more modern “horn-heavy” “drum-filled beat drops”. The song’s melody constantly builds toward something that “should be explosive”, before Azalea brings it back down with her verse “Smart money bettin’ I’ll be better off without you/ In no time I’ll be forgettin’ all about you/ You sayin’ that you know but I really, really doubt you/understand my life is easy when I ain’t around you.”

Azalea also makes a reference to the Jay-Z song “99 Problems” at the end of her verse “There’s a million yous baby boo, so don’t be dumb/ I got 99 problems but you won’t be one.” Additionally, Grande’s notes serve as a metaphor for what the song is about. She can’t get rid of her crush, who she knows isn’t good for her and can’t help but fall in love quickly. As her “heart gets lighter and lighter”, Grande sings “Head in the clouds/ got no weight on my shoulders/ I should be wiser and realize that I’ve got/ One less problem without you.”

A writer from Rap-Up describes the track as an “infectious horn-heavy jam” which features a “carefree” Ariana “declaring her independence” which also includes “an empowering verse from Iggy Azalea and a whispering Big Sean on the hook.” Several critics noted a similarity between the jazzy saxophone breakdown in “Problem” and Jason Derulo’s 2013 single “Talk Dirty.”

Grande and Iggy Azalea filmed the lyric video for “Problem” on April 10, 2014 with Jones Crow as the director. Grande assisted Crow in editing the video and completed it on April 13, 2014 and it premiered on Vevo on May 1, 2014. The video features Grande and Azalea performing in a noir black-and-white clip behind pinwheel go-go filters. 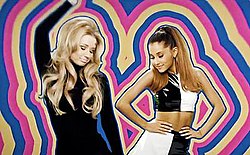 Grande and Azalea over a colorful backdrop during the music video, which incorporates elements from 1960s art.

The official music video was filmed on April 29, 2014, just one day after the single’s release, and was directed by The Young Astronauts who had previously worked with Grande on videos for her singles “Right There” and “Almost Is Never Enough”. Big Sean makes an appearance in the video. The video was set with a retro style from 1960s art movement containing a black, white, and old-fashioned aesthetic. The video opens on a sparkling figure where Grande appears in a sequined minidress and white go go boots with her dancers backed by a spiral backdrop.

Iggy Azalea is shown in front of a colorful background, and, as Jason Lipzshuts from Billboord noted, her hairstyle is reminiscent of Barbarella, while Chima Simone of E! compared her hair to Nancy Sinatra’s in her “These Boots Are Made for Walkin'” (1966) video. The video contains intercepted scenes of Grande lying atop a giant spiral on a pink floor wearing an white sweater and high socks. Lia Ben from website Bustle compared the scene to Britney Spears’s “Oops!… I Did It Again music video (2000).

The video was released on May 30, 2014, and it surpassed 100 million views on July 28, consequently making it Grande’s second Vevo-certified music video after “The Way”. As of January 2020, the music video has over 1.2 billion views on YouTube. The lyric video was nominated at the 2014 MTV Video Music Awards in the Best Lyric Video category. The official music video was nominated in the Best Collaboration, Best Female Video, and Best Pop Video categories, and it ultimately won the award for Best Pop Video. It was Grande’s and Azalea’s first time winning a VMA.

In July of the same year, English band Rixton released a cover of “Problem”. Idolator wrote they “replaced the brass-heavy original with soulful harmonies, snaps and nasty guitar licks. No Iggy section to be found here, but with lead singer Jake’s powerful chops at the forefront, the rap is hardly missed.” The a cappella group Pentatonix covered the song on their album PTX Vol. 3, released on September 23, 2014. Entertainment Weekly noted the cover was more “low-key” than the original version. Billboard said it was “catchy”. On January 9, 2015, “Problem” was covered by Naya Rivera, Heather Morris and Dianna Agron in “Homecoming”, an episode of Glee.

[Intro: Iggy Azalea & Ariana Grande]
Uh-huh! It’s Iggy Iggs!
I got one more problem with you girl, hey!
(One less, one less problem)

[Verse 3: Iggy Azalea]
It’s Iggy Iggs!
Uh, what you got?
Smart money bettin’ I’ll be better off without you
In no time I’ll be forgettin’ all about you
You sayin’ that you know, but I really, really doubt you
Understand my life is easy when I ain’t around you
Iggy Iggy, too biggie to be here stressin’
I’m thinkin’ I love the thought of you more than I love your presence
And the best thing now is probably for you to exit
I let you go, let you back, I finally learned my lesson
No half-steppin’, either you want it or you just playin’
I’m listenin’ to you knowin’ I can’t believe what you sayin’
There’s a million you’s baby boo, so don’t be dumb
I got 99 problems but you won’t be one, like what

DanyanCatSQ is a Mexican TikTok star and gaming YouTuber born on December 14, 1995, in